From interstellar dust to planet formation

The behaviour of aggregates of interstellar dust in protoplanetary disks during the birth of planets is one of the key unsolved problems of astrophysics and planetary science.

The building blocks of all planetary types are essentially the same, including rocky terrestrial planets, the core of gas giant planets, exotic Super-Earths and even mini-Neptunes discovered in extrasolar planetary systems. All form by accumulation of dust aggregates increasing in size until a diameter of one kilometer or more. The largest boulders become massive enough to attract other rocky bodies by simple gravitational force.

The phase bearing the most unanswered questions is that just before gravity sets in, when dust aggregates range between millimeters and meters in size. The basic physics involved is known, but solid predictions based on first principles are not possible due to the complex interplay between the largely unknown material properties and the dynamics of various compounds at extremely low pressures and densities.

One of the crucial aspects is the development of instabilities in the flow of interstellar gas and dust triggered by the different velocities of gas and dust particles. Such instabilities can lead to rapidly rising local concentrations of dust and in turn to their enhanced growth in size via agglomeration. So far, the flow of gas and dust has mostly been studied with complex 2D and 3D numerical models on powerful supercomputers. They are of general interest for fluid-dynamics and material science, but even more for the early stages of planet formation. Only recently, these instabilities have been studied in actual laboratory experiments which try to reproduce the extreme conditions of the local flow in a protoplanetary disk region.

At the University of Zurich our group at the Institute for Computational Science (ICS) specializes in state-of-the-art computer models of such instabilities. We have recently proposed a new type of instability relying on vortices in the interstellar gas which could promote the rapid growth of planetary bodies.

Through additional support of our NCCR PlanetS project (http://nccr-planets.ch/about-us/members-nccr-planets/) we have recently assembled a unique multi-disciplinary team comprising computational astrophysicists (PI Lucio Mayer), planetary scientists with laboratory experience (PIs Prof. Antoine Pommerol, Dr. Holly Capelo, and Prof. Nick Tomas at UniBern), and cosmochemistry experts studying the record of planet formation contained in meteorites (PI Prof. Maria Schoenbaechler at ETHZ) to attack the problem from multiple angles. We are currently designing a new set of experiments using flow chambers with suspended dust particles to be hosted on upcoming parabolic flights in 2020. This first experiment will measure the drag force on dust particles with porous structure and irregular shapes compared to the smooth spherical particles assumed in conventional models. The results will provide new important hints on how to improve models.

Laser light is reflected off of carbon aerosols suspended in a gas stream, at three different times, a few seconds apart. At the border between where the flow is rich in dust and where there originally is none, rolls develop and eventually lead to structured flow patterns analogous to those of the simulations shown above. The laboratory experiment was carried out at the Max Planck Institute for Dynamics and Self-organization (MPIDS) in Goettingen (courtesy of Dr. Holly Capelo, University of Bern). 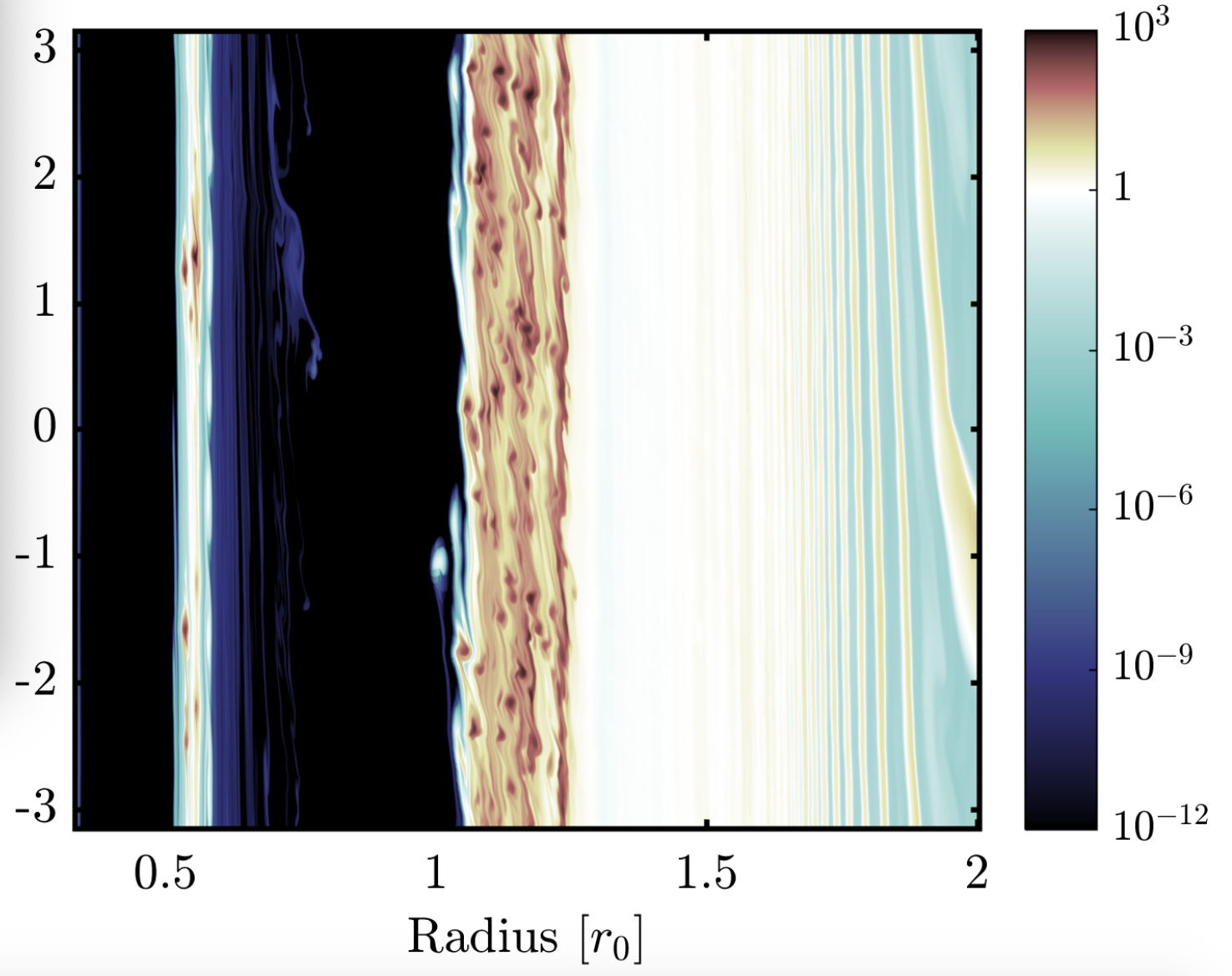 Snapshot of a supercomputer simulation carried out by the ICS team of Surville and Mayer at UZH showing turbulence arising in the dust distribution. The rolls leading to particle concentration arise from an instability triggered by the dust grain-protoplanetary gas medium interaction.