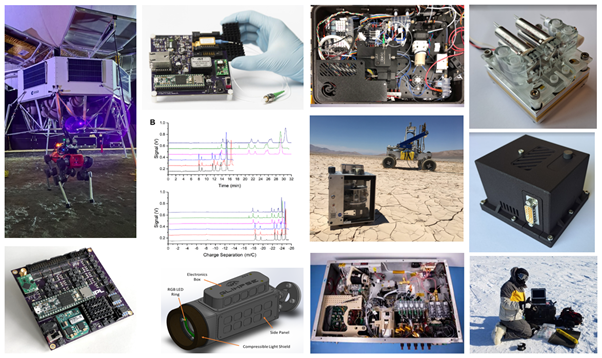 Florian Kehl is a senior scientist and teaching assistant at the University of Zurich’s Space Hub, a lecturer at HSLU T&A’s Space Biology Group, and a NASA-JPL affiliate within the Chemical Analysis and Life Detection Group. His research focuses on in-situ instrumentation and liquid-phase sensor systems for astrobiology, space biology, and in-situ resource utilization (ISRU). Before returning to Switzerland, he spent five years at NASA’s Jet Propulsion Laboratory (JPL), working on the development of life detection instruments for Mars and Ocean Worlds. He was the lead technologist for SCWE (a subcritical water extractor) and the microfluidic CE-LIF instrument on the JPL Ocean Worlds Life Surveyor (OWLS) suite. As a payload designer, he participated in numerous simulated missions in extreme environments such as the Atacama Desert (Chile) or the Arctic. Kehl is co-leading the project GLIMPSE (“Geological lunar in-situ mapper and prospector for surface exploration), funded by the European Space Agency ESA, to search for resources on the Moon by an autonomous, legged robot. He also acts as an advisor for the ETH ARIS rocketry team and supports the students in developing a rotating, “artificial gravity” CubeSat platform which shall be launched to space in 2024.

Watch the following video and listen to Florian Kehl explaining his work on the Swiss robot dog GLIMPSE, developed to prospect resources on the Moon: